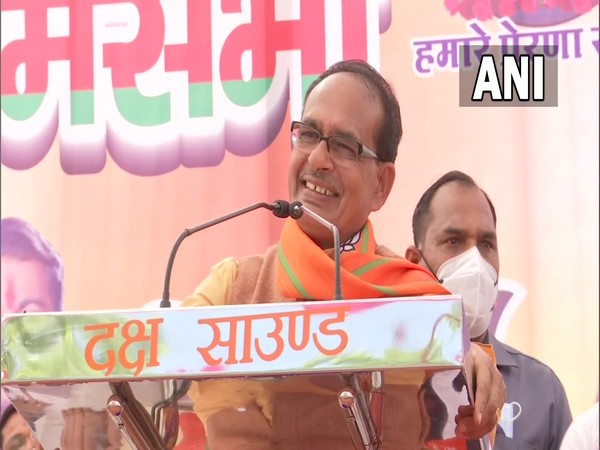 Khandwa (Madhya Pradesh) [India], October 22 (ANI): Madhya Pradesh Chief Minister Shivraj Singh Chouhan slammed former Chief Minister Kamal Nath over his 'actor and director' jibe and said Congress doesn't see the development work, 'this actor is bringing water supply in the region.'
Chouhan while addressing a rally in Khandwa district ahead of the upcoming by-election said on Thursday, "Congress doesn't see these (development) works. Kamal Nath was nearby yesterday...he said Shivraj Singh Chouhan is an actor and Prime Minister Narendra Modi is the director... This actor is bringing water supply to the entire Nimar region. You ask your leaders what did they do when it was your government."
Using the 'actor-director' reference once again in his speech, MP CM went on to say, "It was the director, Prime Minister Narendra Modi, who decided that Rs 6,000 per year will be deposited in bank accounts of the smallest of farmers. The actor, Shivraj Singh Chouhan, decided that PM is giving Rs 6000, I've become CM for the 4th time so I should add Rs 4000 to it and give them Rs 10,000 per month," said Chouhan.
Earlier Congress leader Kamal Nath during the election campaign in the region said people should identify "actor and director" in the saffron party for their own benefit.
The by-polls in Madhya Pradesh will take place on three assembly segments-- Prithvipur, Jobat and Raigaon and one Lok Sabha seat-- Khandwa.
As per the notice issued by the Election Commission of India (ECI), the by-elections will take place on October 30 and the counting of votes and announcement of results will be on November 2. (ANI)