PM Modi is an incarnation of Almighty, says UP Minister 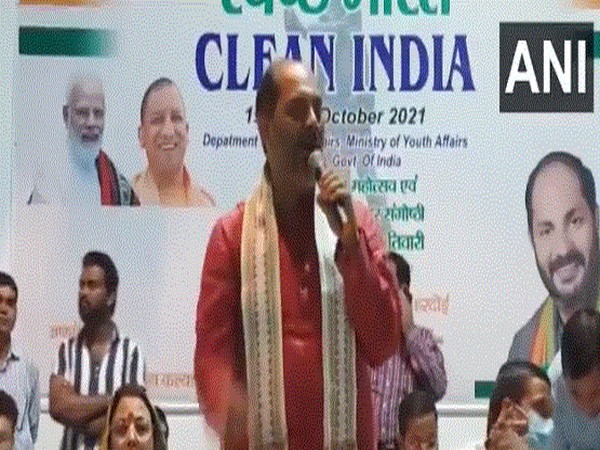 Hardoi (Uttar Pradesh) [India], October 27 (ANI): Uttar Pradesh Panchayati Raj Minister Upendra Tiwari on Tuesday hailed Prime Minister Narendra Modi and said that the latter is no ordinary person adding that he is an "incarnation of the Almighty."
"Narendra Bhai Modi is no ordinary person. He is an incarnation of the Almighty," Tiwari said while addressing a gathering in Hardoi.
Addressing the "Swachh Bharat" seminar as part of the Amrit Mahotsav here, the minister said, "They made a coalition in 2019. The 'Bua' (aunt) and 'Bhatija' (nephew) who did not want to see each other formed the coalition. 24 such parties formed a 'Mahagatbandhan' (grand alliance). They had only a single agenda that is 'Modi hatao' (remove Prime Minister Narendra Modi)."
Tiwari also said that all the leaders of Uttar Pradesh and the country will now start visiting temples due to the approaching 2022 Assembly elections.
When asked about Delhi Chief Minister Arvind Kejriwal's Ram Temple visit in Ayodhya, Tiwari said, "Not only Kejriwal, now all the leaders of Uttar Pradesh and the country will start visiting temples because 2022 (elections) is coming. Then they will have no problem with Lord Ram and Lord Hanuman. They should visit. I want to congratulate that he (Kejriwal) has at least gone to visit Ram Mandir."
Earlier on Tuesday, the Delhi Chief Minister offered prayers to Ram Lalla at the Ram Janmabhoomi site and visited the Hanuman Garhi temple in Ayodhya. He also met Mahant Gyan Das Maharaj in Hanuman Garhi.
On Monday, Kejriwal joined the Maha Aarti on the bank of the river Sarayu, worshipped the Goddess and took her blessings.
Also, this visit by Kejriwal comes just months before the Uttar Pradesh Assembly elections to be held in 2022.
Notably, AAP will also contest the elections in the state. (ANI)